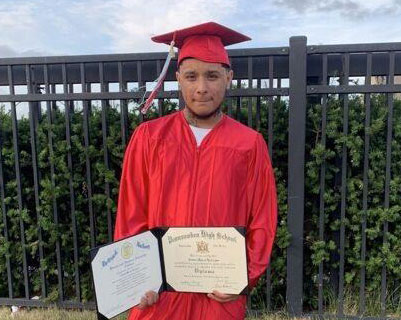 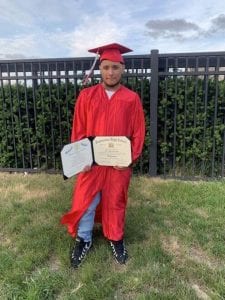 According to a release, the school opened, in March 2019, to provide educational and emotional support to teens in recovery from substance abuse. Coastal Prep partners with Cape Assist, a substance-abuse treatment agency, to ensure students receive needed services and coordinates with students’ sending high school to streamline the curriculum.

“Armani is an exemplary student and embodies why recovery high schools like Coastal Prep are crucial,” stated Dr. Toni Lehman, director of Curriculum and Instruction for the Middle Township School District. “He came to us determined to graduate and he surpassed that goal. We are so proud of him and honored that he’s our first graduate.”

Rodriguez enrolled in Coastal Prep for the 2020 spring semester before the COVID-19 shutdown. His decision came after months of living on the streets and then facing not one, but two life-altering events.

“I didn’t think I was going to finish school, I fully expected to drop out,” stated Rodriguez. “It wasn’t until I was in the hospital facing my own mortality that I decided the streets couldn’t take me away. Around this same time, I lost a close friend of mine who really helped me out when I was living on the streets. He wanted me to live a better life, and to see me graduate.”

Rodriguez knew it was time to reevaluate the course of his life, lean on his family for support, and accomplish the dream his friend had hoped to see. More than that, he was focused and ready.

To attend Coastal Prep, Rodriguez commuted more than an hour each way from his home in Pennsauken. His course load included seven classes, including two English classes, public speaking, finance, and gym. Initially, he even took on extra math and science coursework. In addition to his academic work, Rodriguez also received recovery support from Coastal Prep staff and Cape Assist counselors through individual and group sessions.

Once schools closed, in March, there were concerns that students would lose momentum without in-person education and support. That was not a factor for Rodriguez; he became even more focused.

“Armani excelled in everything thrown his way,” stated Coastal Prep Interim Director Frank Riggitano. “What stands out to me is that he didn’t let the shutdown revert him to past behaviors. He pushed forward and overcame a lot of obstacles. With the drive and focus he demonstrated, he has a strong future ahead.”

Rodriguez completed all his coursework and met with his teachers and counselors virtually, while also working full-time at a local Popeyes restaurant to help ease the financial burden for his family.

“This is a high milestone for Coastal Prep, but Armani is the true success story,” stated Middle Township School District Superintendent Dr. David Salvo. “When reflecting on his time with us, it’s astonishing. His transition from in-person to virtual learning and counseling due to the pandemic could have ended his goal of graduation because of the profound disruption, but it didn’t. He’s a remarkable young man, and we wish him the best as he begins the next phase of his life.”

The future looks bright for this Class of 2020 graduate and aspiring musical artist, who hopes to make inroads in the industry while continuing to work and focusing on his recovery efforts.